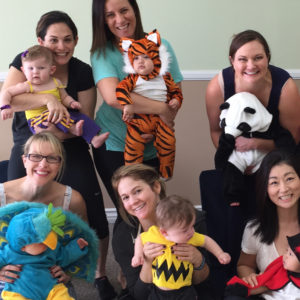 I recently heard this story about a Gorilla who was raised in captivity. I am probably about to leave out approximately one million tiny details in this story, but It goes like this: once upon a time, there was a female gorilla named “Maggie.” Maggie was born and raised in a zoo, where for unknown reasons, she was the only female. At a certain point, it was decided that the time had come for Maggie to have a gorilla baby. The powers that be brought in a male gorilla, they did their gorilla business, and lo an behold, Maggie gave birth to a beautiful baby gorilla. Now, remember, Maggie, being raised in captivity, had never seen a mother and baby. When Maggie gave birth, she stared at her baby, and the zookeepers were shocked to observe that she looked almost confused, walked away without picking up, or feeding the baby gorilla. In the weeks to follow, no one was successful in getting Maggie to attach to her baby, let alone feed the baby. Sadly, the baby passed away shortly thereafter. Thinking this had to be an anomaly, the zoo keepers decided to give it another go, and Maggie became pregnant again.

Now, I don't know who’s idea this next part was, but I am going to guess it was a mom, but someone decided that the problem was that Maggie had never seen mothers care for their babies, and she had never seen breastfeeding. The solution? Everyday women from Le Leche League volunteered to breastfeed their own babies in front of the gorilla area.

They did this in shifts, so Maggie had daily exposure to moms and babies. Sure enough, when she had her next baby, the most amazing thing happened. Maggie looked at her baby and immediately pulled her baby to breast and fed her baby, mimicking the moms that had come to be her guides, her own mama village.

In a sense, most of us in modern society are “raised in captivity.” Meaning, we may have not been around newborn babies, or witnessed a lot of breastfeeding before having our own children. One important predictor of breastfeeding success is, in fact, having seen breastfeeding before. Yes, breastfeeding is natural and normal, but because we have moved to a more private society, many moms need some guidance around breastfeeding. It’s tough to intuit something we have not seen. Sure, I had visited a friend or two that had had a baby, could I say that I was super comfortable with newborns, probably not. As awe inspiring as becoming a new parent to a tiny human can be, it can also be quite overwhelming and isolating at times.

Somewhere along the way, we have lost our village.

We have switched our view of parenting from an extended family, community endeavor, to something we need to manage on our own 24 hours a day, 7 days a week…..with little to no sleep. Somehow, some way , I managed to stumble into a breastfeeding support group in my son’s first month of life, which led me to a year long mommy and me group that I’m pretty sure saved me, my breastfeeding, and probably my sanity. Even though I was new to the city, I now had a sanctuary of other moms going through the same thing, was able to have a place to ask questions, share stories and even find humor in the dark times. I found my village.

Parenting is not easy, and I truly believe we were not meant to do this alone. I created Kinspace out of this need. The need for parents to have the support, education and tools they need to feel confident in their new roles, as well as a community to share it all with. I hope to share my passion, my vision, and make this community our village.